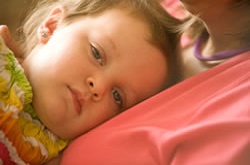 Sandhoff is a progressive neurological genetic disorder caused by the absence of a vital enzyme.  It is one of over 50 genetically inherited disorders known as Lysosomal Storage Diseases.

There are 3 forms of Sandhoff

Juvenile Sandhoff - Symptoms appear after the first year of life, typically between ages 2 and 5, but can occur anytime during childhood.

Who is at risk?

Anyone can be a carrier of Sandhoff. When both parents are carriers, each child has a 25% of having the disease. The carrier rate for the general population is low, approximately 1/600 and it is not yet clear whether Sandhoff disease is more common in any particular population, but may have a higher carrier rate in several somewhat isolated populations. Talk to your doctor about Genetic Counseling to discuss your options before starting your family.

Research - To date, there is no treatment or cure for Sandhoff disease but there is exciting ongoing research.

History of Sandhoff - The disease is named for Konrad Sandhoff, a German chemist.