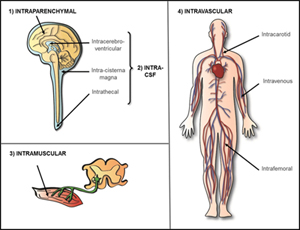 1) Intraparenchymal Delivery of AAV
Intraparenchymal, also referred to as intracranial, refers to directly injecting AAV vectors in to the brain parenchyma, or brain tissue. This strategy allows targeting of specific brain regions, such as highly interconnected white matter tracts or specific brain nuclei, and occurs within the blood-brain barrier. The number and location of injections, the vector serotype, and properties of the enzyme will determine the spread of the treatment throughout the central nervous system (CNS, brain and spinal cord). Due to directly injecting brain tissue there can be unfortunate effects such as hemorrhage. This was the strategy used in an early Canavan trial in which AAV2 was delivery in six cranial burr holes (https://www.ncbi.nlm.nih.gov/pubmed/16532510).

2) Intra-CSF Delivery of AAV
Delivery of AAV into the cerebrospinal fluid (CSF) can be performed in the brain or the spinal cord. CSF delivery avoids directly injecting brain tissue yet still occurs within the blood-brain barrier.

Intracerebroventricular (ICV)- ICV refers to delivery of AAV into ventricles, or large cavities in the brain that hold CSF. The largest and most common ventricles to target are the lateral ventricles. Each cerebral hemisphere, left and right, contains a lateral ventricle.

Intrathecal (IT)- also referred to as lumbar intrathecal, occurs at the bottom of the spinal cord. Lumbar intrathecal delivery is considered the least risky of the CSF delivery routes; however, the AAV vector has the furthest to travel to reach the brain. This is the strategy being utilized in the Batten disease (CLN6) clinical trial (https://clinicaltrials.gov/ct2/show/NCT02725580).

3) Intramuscular Delivery of AAV
AAV can be directly injected in to muscle for diseases that primarily affect the heart and/or skeletal muscle. This strategy is being utilized in the clinical trial for the lysosomal storage disease Pompe disease (https://clinicaltrials.gov/ct2/show/NCT02240407).

4) Systemic/Intravascular Delivery of AAV
Systemic or intravascular is delivery of AAV vectors directly to the blood system. Certain serotypes of AAV, such as AAVrh8, AAV9 and AAVrh10, have the ability to cross the blood-brain barrier. Those serotypes can be used for systemic/intravascular delivery to target systemic disease as well as the central nervous system (CNS, brain and spinal cord). The procedure itself is non-invasive; however, a larger volume of AAV vector is required and the amount of vector that reaches the CNS is typically less than targeting the CNS directly. High levels of vector and enzyme can also be found in specific systemic tissues, such as the liver, due to delivery in to blood circulation.

Intravenous (IV)- most commonly systemic/intravascular delivery of AAV vectors is done through a venous catheter into a limb vein. This is the strategy being utilized for the MPSIIIA, or Sanfilippo syndrome, clinical trial (https://clinicaltrials.gov/ct2/show/NCT02716246).

Intra-arterial (IA)- there are ongoing studies in animal models, although no human clinical trials, evaluating delivery of AAV in to arteries instead of veins. The most common arteries being investigated are the carotid and femoral arteries.